Amber Green Tour of Ulster…& some..

Imagine dieing inside the first 3 seconds of a 4 day Stage… yes imagine that.

Friday Day 1- 1st May 19:55 I lined up at the gates of Stormount Government buildings belfast  with the objective of riding as hard as one can to the top. That was stage one.. 3 hours of preparation that only took  1 min 57 secs …of pain I might ad. But it was to end very well for the team, Damien(Shaw) motored up it and set the fastest time meaning we were in Pink(leaders jersey)..

You can do all the training you want but nothing can prepare you for the weather and by the looks of things it was to turn nasty and it did. We started in Belfast and we were to make our way to newry on some testing roads. I started to look at this stage 3 months ago and if i was to have an A race on my calender that day would have been it. Newry is like a second home, Ive lived there and played football there and have many friends there, winning was an option.  I recced the course 3/4 times because its handy to do it on a long spin from my house. I was well used to the last 50 mile of the route..
This race starts like them all, attack, follow, attack.. until something establishes but nothing was sticking and i took my chances on nothing getting away.. I did however get into group of 5/ 10 mile from castlewellan. Too early in the stage to be burying yourself  but it all seemed to come back together at the top of castlewellan. There was a tasty KOH there and when we turned left for Bryansford I put gently rolled off the front on my own. Block headwind  helped as not too many wanted to chase. I welcomed Dowling and Hassey towards the next big test, Spelga Dam.
Weather was getting bad but something I welcomed and when we were on the Cat 1 spelga the comm told us we were to be stopped because we went the wrong way.. I reply, ‘ by f*&%’.. ‘ we didnt’ .. turns out they sent the chasing pelaton the wrong way and neutrailsed us at the top where it was 1 degree and freezing.. I think Eoin morton peed on his hands for a bit of warmt.. I however was grand.. somtimes it pays to eat some cake.
Eventually we continued but it was not to last.. The race was abandoned on the decent.. ‘ You cant cancel a race in the middle of nowhere’ a VeloRevolution rider piped up and said.. and thats they did..
Disappointed was an understatement but with no medical on the course due to crashes the race had to be called off. Though the racer in me would ride through anything , looking about there were guys unable to unclip their helmet. 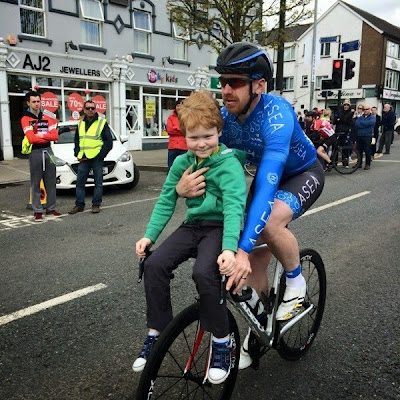 Today started with Stage ones placings so it meant we still held the lead.. A better day and I was on familar roads. I wasnt too hot for the first hour, I found it tight enough but found my rythum when things settled and got away with a good selection.. I didnt ride for a while because i felt I couldnt with us in pink. Naturally the group whittled down with the climbs and 6 remained.. 3 clipped off and I wasnt able to go… Dowling was one of those and it left me with Mckenna, Mclaughlin and lacey. Irvine arrived and it didnt help my situation. It seemed Mckenna and Irvine wanted across but not with me. I had to deal with both attacking me but with the race up the road we would have been better coming to a short term agreement.
Coming into the last 6/7 km we were caught by a chase group and from here it was just a matter of time saving. I sat in but wasnt comfortable with 1km to go. The earlier efforts didnt leave me with a match to light for the group gallop.
After today GC was gone for me and our team.

Karen and the kids arrived today because it was more spectator friendly with a 10 mile lap around the town of Cookstown. The BST contingent was there also and today we had one plan and that was to win. In all my years in team sport Ive found it very easy to win but to lose not so.  And thats what was happening, Team Asea was losing the overall and wasnt looking likely we’d get the win, a stage win was all that mattered. A real test of character is how you respond when your losing, you find out about people. We were in everything and after the first few laps I knew we’d do the job. The laps saw a few groups slip away that we were present in. Ucd made a great attempt to hold onto the jersey towards the end when it looked like it would stay on the shoulders of morton. My only concern was our guys not to be caught for the stage. Roger and Damien were up the road and I knew the lads would finished it off… in the distance on the crest of one of the hills i could see 1 minute up the road and I could see the style of the dodger swaying the bike side to side effortlessly gunning it alone..
A great win for Dodger…job done

Thanks to all the back up, Gary, Brendan, Ondrej and Bob Davision for Giving me a dig out.. 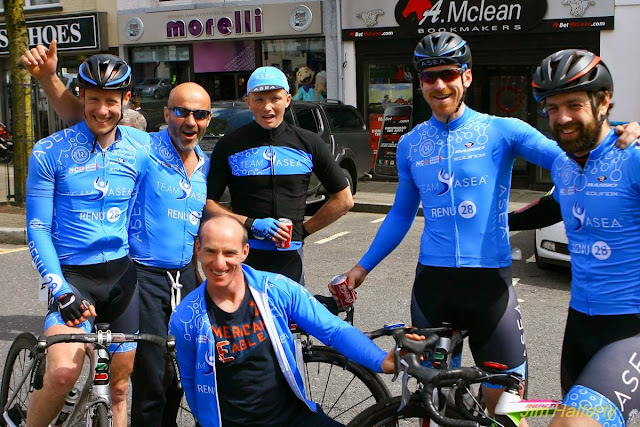