Easter for the last two years has been spent away from home with other guys that have the same interests as me, the Ras na Mumhan. The Easter bunny is a big deal in our house so its another sacrifice on my families part. It also is my daughters birthday and last year she brought me some luck when i won the final stage.
Some pressure was thrown our way to perform but you would never of guessed from the atmosphere in the B&B. There didn’t seem to be a minute going by that somebody didn’t get a sneering and laughed at.  The diner table brought some entertainment from a few colourful characters on the team. You certainly wouldn’t want to be sensitive in our crew.
We made no secret that the aim was to come out on top by the end of the four days. Our squad on paper looked one of the strongest but we still had to lace up and do a job.
Day 1
We rolled out of Killorglin in the beautiful Kerry sunshine at 15:30 and it was clear to see everybody was up for it. Attack after attack after attack but nothing stuck. Our jersey was  well  marked but then again we marked a fair few ourselves so there no point in complaining. No kind gestures would be made in the 116km’s that we raced, our handshakes and compliments would be left in the car park. See a wheel and hold it, see a hole and fill it,  hide from the wind that was causing havoc within the pelaton. It seemed like the stage was one big line out with the culprits being the young Rapha JLT guys eager to impress. But it wasn’t to be their day with Paidi O Brien taking the stage and it was job well done from us.
Day 2
Roger had go the way roger knows and had quality company in the form of Martyn Irvine riding with the national squad. Martyn oozes class but so does Roger and when those two go up the road you sit up and take stock. I on the other hand was back the road chasing after receiving a puncture. Thankfully i got back in & the guys informed me what was after going down.
Many tried to get over but either didn’t have the legs or the lungs. Sean McKenna also from the Irish squad put in a big effort to join his teammate, it was strong enough to get out but not strong enough to go without the presence of Stage 1 winner and yellow jersey Paidi and our man  Damien Shaw.
Again the young Rapha Guys rode… hard! We were to meet those breakies on the second last climb and it was  dowlings turn  to unleash some hurt. He split the bunch to about 20 riders only capable of holding his wheel and myself and ali were there.
We descended..the group lulled..I attacked.. 50km from the finished I had a go- on my own!. Not wise but worth a punt.  I folded like a calf with 10km to go and was caught by those pesky rapha kids. Not knowing my own name at this stage I crossed the line thinking of mars bars and kitkats. I was to lose vital seconds for not doing the basics, feeding!
Day 3
The wind picked up and so did the speed. Roll out was eventful and it was clear that the pelaton had there porridge for breakfast. Flag down, hammer down. It was like a major sergeant shouting ” THIS IS NOT A DRILL SOLDIER ” 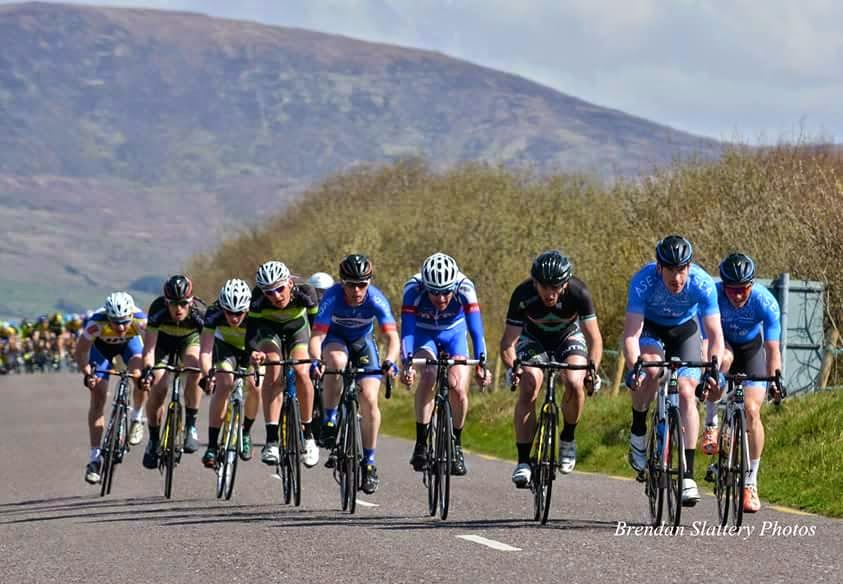 Asea was there in the form of Damien and myself. For company we had Morton,clarke, lacey, mason, hassey, stewart, mckenna. This train was going, infact it was gone before the bunch could even dream to buy a ticket. But the strangest thing happened, we were sent the wrong way. Race stopped and restarted with 40 sec gap reinstated. It didnt work this time as circumstance changed and lungs were refilled from the chasing wolves. 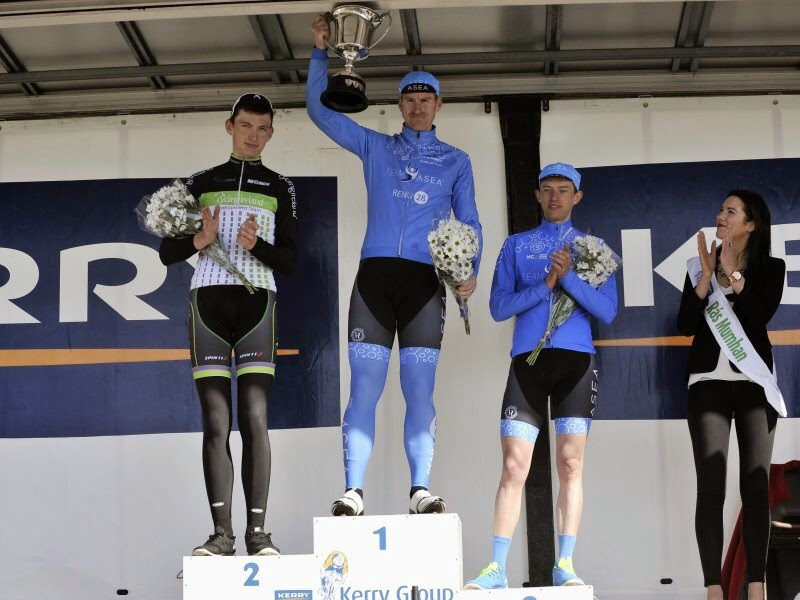 Not long after that I was in a good position to go with a  good move with one  of the English guys from Champion Sysyems along with a dutch kid. Sure enough Mckenna wouldnt be far off, he rarely doesnt go with anything. We went full gas from the get go and no words were spoken. This worked and we stayed away. This was the queens Stage and dealing with a Cat 1 climb coomanaespeg had to come. I wont lie, a little fear was in me and this was confirmed when I saw the bloody thing… Dear F*&$!!  A recalibration of my saddle height since the Hanlon had me feeling better seated on the climbs. It worked and at 90kg i got up it, just about!! .. The support and atmosphere was electric and seeing the passion in guys like Michéal O’Shea shouting you on was on was uplifting.
We held the bunch at bay but 20km was still to go. Dowling arrived with a Scottish guy and full cooperation from everybody wasn’t going to happen from here to the finish. The Scottish lad jumped off the front and we had a job getting him back. It was only myself and mckeena that could go across and it looked like it would be between us three for the win until the Scottish guy blew up. Myself and Mckenna rode honest until the last 500m when I got the better of him in the sprint.
The best part of my day was turning around and seeing Ali get 3rd. That was a great day for the team.
Day 4
We started 2nd and 3rd on General Classification. Mckenna was in yellow and he didn’t look tired from his efforts the day before. We felt good and confident we could win the overall. The pelaton was  marshaled really well by the Irish and Irvine showed his experience. The other Irish kids that didn’t show there faces much all weekend stood up and helped there man. We tried but we needed the day to be harder and longer but it was what it was. Mckenna minded himself really well and for the first time I saw maturity in him. That’s not a criticism but a compliment. The GC finished as it started and Team Asea went home with plenty. We won the Team prize , Stage, 3rd on a stage and 2nd and 3rd overall.
Big thank you to Team Manager Brendan Grimes, Driver Alan Geoghan and Masseur Gary Morton.Also to the race organisers, volenteers who did a fantastic job. 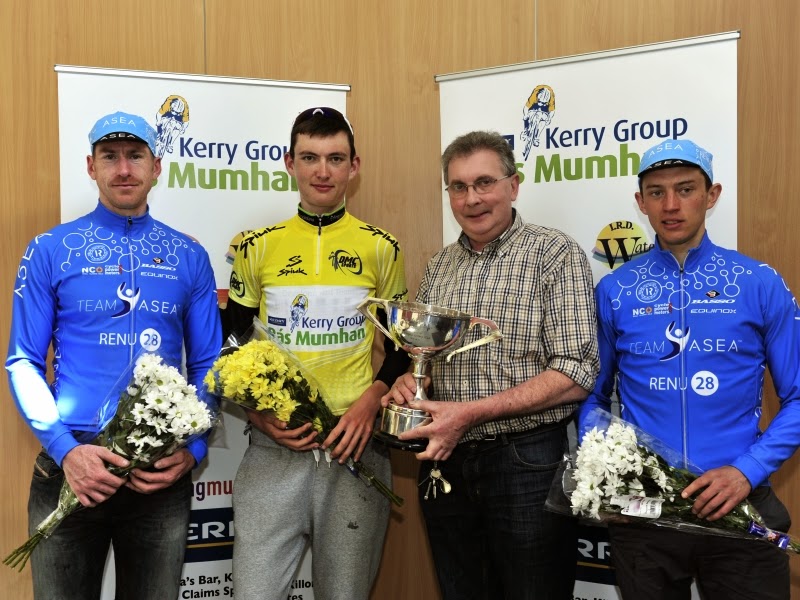